Scenario:
November, 2013—Arcadis US had secured a contract with the US Air Force Air Mobility Command to perform an inspection of the wooden structural support joists in two World War II era hangars at the Naval Air Engineering Station Lakehurst in New Jersey. The hangars were damaged when Hurricane Sandy slammed into the area.

During the 1920s, Lakehurst Naval Air Station, or NAS as it was previously known, was the center of US airship development and housed US Navy rigid airships. NAS is also renown as site of the Hindenburg zeppelin crash on May 6, 1937. Antisubmarine patrol blimps operated from the base throughout World War II, and the massive hangars used to berth these ships survive to this day.

Airship Hangers 5 and 6 are historic buildings constructed in 1943 and are the world’s largest single arch wooden structures. Wood timbers were used because wartime steel production was prioritized for weapons manufacturing. Each immense hangar is 1,100 feet long, 300 feet wide, and just over 180 feet high with gigantic retractable doors at each end.

Challenge:
Hurricane Sandy damaged part of Hanger 5’s roof which prompted an inspection to see if the joists were structurally sound. Safely reaching the 183 foot arched wooden ceilings within a tight time schedule proved to be perplexing.

Scaffolding was considered, but that would be laborious and expensive within the allotted six week timeframe. Manlifts could help, but only up to 135 feet. How to reach the ceiling?

Solution:
Fortunately, Banks Industrial Group was approached and proposed the safest and most efficient solution—A highly specialized Bronto S-90 Skylift with 300 foot vertical reach and articulated arm that can extend up and over obstacles—one of just eight machines in North America. The Bronto provided a stable platform for inspection work, easily reaching the high ceiling and smoothly maneuvering within the arched structure.

Locating specialized equipment isn’t the end of this story. The ultimate key to success was BIG’s comprehensive project management of the process—establishing safety criteria, sourcing the equipment, providing certified operators, and making sure things ran dependably from start to finish. This removed the stressful challenge of accessing an unusual structure and enabled inspectors to focus on what they do best.

Banks Industrial Group also provided labor to remove a mesh material suspended 130 feet above the hangar floor. The mesh is used to prevent wooden ceiling debris from falling to the work area below, and was necessary to remove for inspector access. Additionally, BIG arranged operators for other JLG type manlift equipment required for the job. Again, the benefit was allowing inspectors to fully focus on the task of inspection.

Conclusion:
In the end, BIG’s consultation and project management assistance enabled Arcadis to save time and money during the inspection–finishing the project a week ahead of schedule and below the proposed budget, which was our goal all along.

Our client had the following comment to owner Gary Banks and General Manager Dave Arnholt concerning the project:

“I have had many doubts during this process as we have attempted to figure out how to perform this work. Since you and Dave have become involved, I have had a much higher degree of confidence that we can get this done for the budget we have established with AMC.” 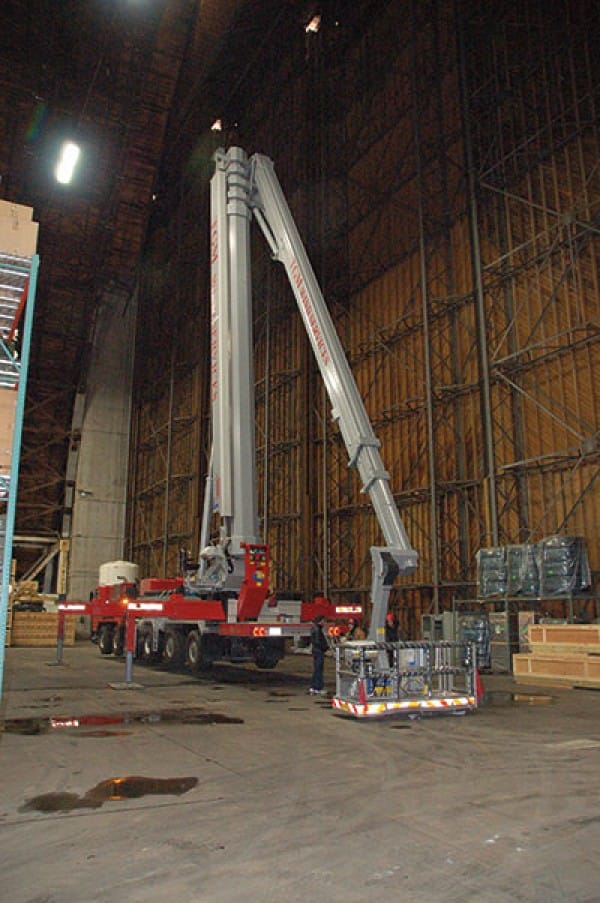