His job responsibilities include transporting the Bronto from site to site safely and undamaged, conducting daily inspections of the trucks, and helping out with troubleshooting calls that come in from operators out in the field. In addition, Andrew makes sure that all Brontos have the correct paperwork, and that they are taking the most efficient route to and from each job site. 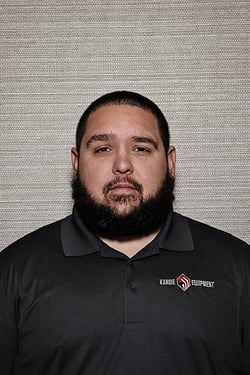 In the six years of Andrew’s employment with Kardie, he has travelled all across the country, but his favorite project was one in northern Oregon. There, he was able to check out the waterfalls, mountains, and other incredible scenery. He even had the chance to fish in the Columbia River, where he caught a 4 foot long sturgeon!

All of the traveling is definitely Andrew’s favorite part of working for Kardie. He’s visited cities and states that he wouldn’t have seen without TGM, and is very grateful for the opportunity to do so. He’s also grateful for the trust of CEO Kevin Darby and Director of Operations Keith Darby, who have promoted him to the position that he currently holds. Not to mention, he’s been able to get over his fear of heights!Another favorite project site was in the city of Fort Stockton, TX. It was a particularly large job that required multiple Brontos and the crews that came with them, so Andrew was able to work alongside a number of his coworkers, which is a time that holds particularly fond memories for him.

Outside of work, Andrew enjoys a dynamic lifestyle. His hobbies include playing semi pro football, fishing, spending time with his family, and teaching his children to play sports. He also has two dogs, American Bullies named Hulk and Athena.

Born and raised in Knox City, TX, Andrew is a Texan through and through. It’s evident in the teams he supports: the Houston Texans and the Texas Longhorns. Even his favorite food is home grown: Texas BBQ. He’s also got a weakness for cheesecake, another favorite of his. While his work has taken him all around the US, he still has yet to visit the top places on his bucket list: Australia and Ireland. Let’s hope he’ll get a chance to explore those countries one day!

We’re so happy to have Andrew at Kardie/TGM. Thank you Andrew, and congratulations!