After almost 11,000 miles of travel, Kardie Equipment has landed back stateside after an exhilarating week in Germany!

Bauma, the international trade show that takes over Munich, caters to the industries of construction, mining, engineering, and more.

Along with conference exhibitors Bronto Skylift, Kardie representatives demonstrated the capabilities of the S 295 HLA for the 600,00 attendees gathered. We were excited to have visitors from all over the world, including Australia, Brazil, Oman, Korea, and the US. The booth was, over 5,000 square feet and boasted a terrace, info desk, meeting room, and bar. Twenty-two representatives from Bronto were needed to monitor the booth’s activities. 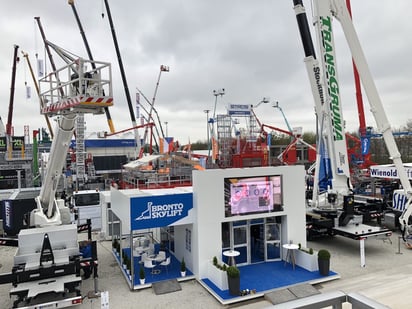 Bronto was one of 3,425 exhibitors from 58 different countries, and while the booth was generously sized, it was far from the largest. The Germany-based crane manufacturer Liebherr had an enormous booth to contain the heaviest equipment at the show: the LR 1800 crawler crane, clocking in at 2,140,000 pounds. Combined with the second and third largest booths in attendance, they took up more space than five soccer fields. But the size and complexity of those booths is nothing compared to the Ferris wheel brought to bauma by the Wacker Neuson group.

Some fun facts to place the size and breadth of bauma in context: With over 6,500,00 square feet of meeting space, it is bigger than the smallest town in Germany: Arnis, located in Schleswig-Holstein. It’s also three times the size of the Allianz Arena. More than 13,000 trucks and 600 heavyweight vehicles are used for setup and breakdown, and if all of those vehicles were to form a chain, it would stretch from Munich to Nuremberg (about 105 miles - longer than the drive from Austin to San Antonio!). 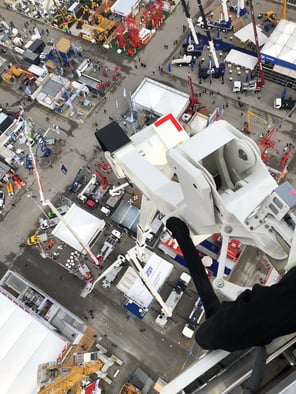 There are also additional baumas and bauma affiliates around the world: bauma China, ConnExpo India, ConnExpo Africa, CTT Russa, and the M&T Expo. And they are all about keeping up with traditions: every year, the Munich show leads all the attendees in a chorus of beeping horns, called “the sound of bauma.”

We were honored to represent Kardie alongside Bronto this year, and look forward to attending more conferences together. Make sure to come to Houston in May and stop by our booth at Windpower!