Meet Samuel! As a Crew Lead for Kardie Equipment (TGM Wind), he tackles a lot on Bronto maintenance, site projects, and he works with customers to make sure they have everything they need. 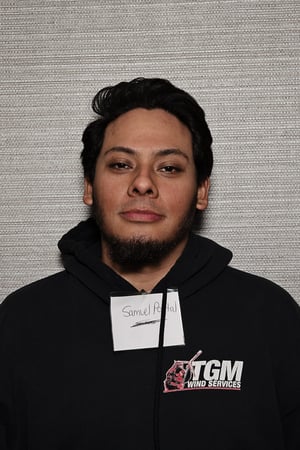 A resident of New Orleans, Samuel was actually born in Hilo Hawaii, but moved to the mainland when he was very young. He has spent a lot of time in Houston, where he went to school, and it was also where his interest in the wind industry began. He was actually originally interested in working in solar energy, but wind ended up catching his eye. When a position opened up at TGM, he saw the opportunity to get more involved in the industry, and took it!


After getting to know the ins-and-outs of the Bronto Skylift over the past few years, Samuel is really able to appreciate a lot about what they are capable of. His favorite part about the Bronto is what he calls the “Transformer effect.” These AWPs start off as compact trucks with a relatively small footprint, and expand to massive, towering structures, some capable of reaching almost 300 feet in the air. They remind Samuel of the trees he used to climb as a child, which he would hang off of and drop to the ground below.


Besides climbing trees, Samuel is a fan of running, cross-country in particular. He hasn’t done it in a while, but it’s something he likes to enjoy whenever he can. He also loves playing table tennis!


If Samuel could spend one week anywhere in the world, it would be the Galapagos Islands. There, he would be able to get an up-close of some of the rarest animals in the world. He might have to make a pit stop for potatoes before getting there, seeing as they are his favorite food! It’s understandable as to why they would be - you really can do anything with them. And for Samuel, sweet potatoes in particular are his favorite.